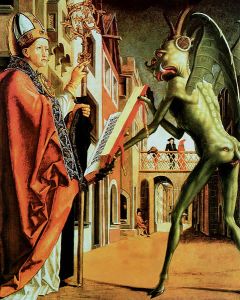 Image: Michael Pacher, St.Wolfgang and the Devil (also called St. Augustine and the Devil), from between 1471 and 1475

‘The Origin of the Devil’

The devil is normally viewed as a theological or mythological symbol, but in this lecture, Adam Kotsko will argue that the devil is equally a political symbol. And this is because the God of the Hebrew Bible is not only an object of worship, but a ruler—of Israel first of all, but also of the entire world. His first major opponent is not a rival deity, but a rival king, namely the evil Pharoah who refuses to let God’s people go. From that point forward, God’s most potent rivals are the earthly rulers who challenge his reign, from the kings who lead Israel astray to the emperors who conquer the Chosen People. This rivalry reaches a fever pitch in apocalyptic thought, which elevates God’s earthly opponent into a cosmic adversary who is eventually identified as Satan or the devil. This lecture traces this complex history, which continues to have strange and unexpected effects in our contemporary world.

Adam Kotsko is Assistant Professor of Humanities at Shimer College in Chicago. He is the author, most recently, of The Prince of This World (forthcoming from Stanford University Press) and is the translator of many works of the Italian philosopher Giorgio Agamben.